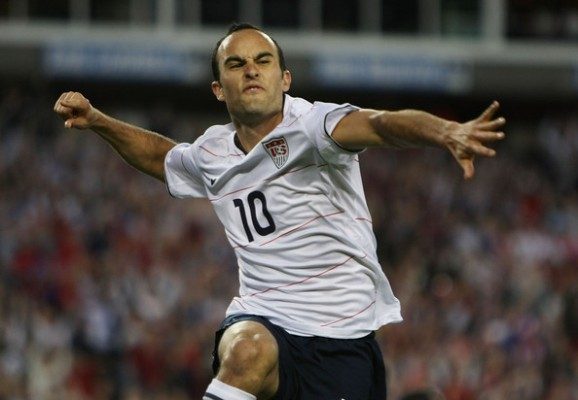 Wonder how the U.S. might fair at the World Cup this month? Well, you’re in the right place. Let’s see how far this rabbit hole goes.

The United States aren’t very good getting past the group rounds of the World Cup. In fact, since FIFA first introduced group play decades ago, the Americans have only reached the second round on two separate occasions: once at home in 1994, and once at the Japan/Korea tourney in 2002. Admittedly, the team have only qualified for eight of 19 total tournaments (or 42%), but even when they do qualify, history hasn’t been kind to them.

That said, the Americans are largely expected to advance this summer in South Africa—alongside England—in their respective group of four, which also includes the tiny country of Slovenia and the embattled Algerian team. Here’s a look at what might happen.

The best case and most improbable scenario would be three wins, netting us nine points—more than enough to advance. The second best scenario would be tying England for a point, then beating both Slovenia and Algeria for six more points.

Now if the Americans lose on Saturday to England, they can still advance by beating both Slovenia and Algeria for six points. Or tying two games and winning one four five points. With a little luck, they could even eek into the second round with a loss, a tie, and a single win, as they did in 2002. But as the numbers show, four points will only get you to the second round half of the time. So you need at least a couple of wins to guarantee advancement.

Provided the U.S. makes it to the second round, they have a favorable draw to go even deeper. In other words, match their 2002 quarterfinal finish, and maybe even make it to the semi-finals as they did in 1930.

To whit, “the top half of the World Cup draw—groups A, B, C, D—are weaker than the bottom four,” notes sportswriter Max Bergmann. “The best teams in this half of the draw are Argentina, England, Germany, Serbia and France,” he adds. “Compare that to Brazil, Portugal, Holland, Spain and Italy.” So with the exception of Argentina in the top half of the draw, “the U.S. matches up fairly well against the rest,” Bergman says.

Now, if the U.S. finishes first in their group, they’ll likely face either Serbia, Ghana, or Australia in the round of 16. None are a push over, but they’ll be easier than getting past Mexico in the Sweet 16, as we did in 2002. In all probability, however, the U.S. will likely finish second in our group, behind England. If that’s the case, we’ll probably play Germany, the same team we were one handball away from beating in the 2002 quarterfinals.

Only this time, they’re a lot older. And their best player (Ballack) is out of the tournament with an injury. As Bergmann observes, “The U.S. would be expected to lose, but [they] match up to well. What’s more, “if the U.S. gets past that game, things get interesting.” Namely, the U.S. could face either Argentina, Mexico, or France. Argentina being the most difficult. Mexico and France tied for second.

This of course would be a very tall order to achieve. But it’s not impossible. And if the American did get all the way to the semis by beating one of the above teams, then they’d likely lose to a superior Spanish team, even thought the Americans beat that team last summer at the Confederations Cup.

Whatever the case, one game changes everything. The Americans are stronger than they’ve ever been. And they have effective weapons on offense. If the defense can pull it together, and Tim Howard plays out of his mind, it will be a really fun and successful tournament. If not, it could be 2006 all over again.