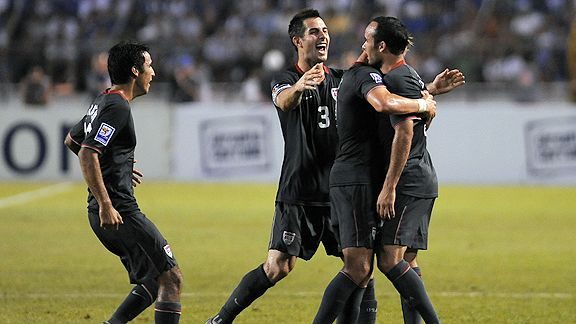 The U.S. men’s national team is going to the World Cup. In an exciting 3-2 comeback win at Honduras Saturday, the Americans secured their place as one of 32 participating nations in South Africa next year. “After what most of us would say was a very disappointing 2006 World Cup, we now have a chance at redemption,” said star forward Landon Donovan.

After falling behind 1-0 in the 47th minute, U.S. forward Conor Casey equalized in the 58th minute, then scored off an assist from Donovan in the 65th minute to take the lead. Donovan followed four minutes later with an exhilarating bending free kick from 20 yards out. But Honduras made it close late in the game, scoring in the 78th and nearly tying it on a missed penalty kick in the 87th minute. “I was relieved,” sighed goal-keeper Tim Howard, who prevented earlier damage with a brilliant fingertip save.

“We did a good job tonight,” Donovan added. “We’re going to South Africa.”

The U.S. has a lot of work to do if they wish to match or best their quarterfinal finish at the 2002 World Cup. But tonight’s win showed the world that the team can in fact come from behind and win on the road.