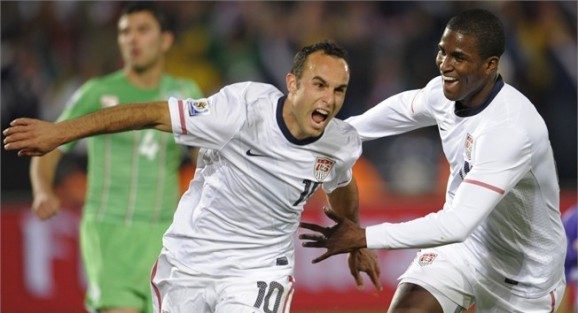 Here’s what FIFA.com said about the U.S. winning their World Cup group:

“A team with more comebacks than Rocky Balboa, the Americans were worthy Group C winners if only for the sheer guts that characterised their campaign. Going behind inside four minutes against England began a habit of giving themselves a mountain to climb, then dragging themselves to the peak. Having fought back to draw with the English and then eroded Slovenia’s 2-0 half-time advantage, it all came down to the final game for Bob Bradley’s side. There, a script worthy of Hollywood unfolded as Donovan, the team’s talisman, struck at the death to take the Americans from third to first – and into the knockout stage.

“This was the moment that defined the group, and it will take something remarkable – perhaps a last-minute goal in the Final itself – to match it for sheer drama. It was after 91 minutes of frustration, and with their dream seemingly slipping inexorably away, that Donovan started and then finished a breakaway goal that is sure to live on in US football folklore.”