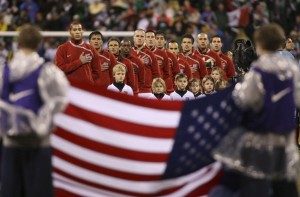 The United States and Iranian national soccer teams will not meet in a “let’s use this to ease political tensions” friendly until after next year’s World Cup, Iranian officials said Sunday.

“Upon the agreement between Iran and the United States, the match was postponed to after the South African World Cup,” said Ali Kaffashian, chief of Iran’s Football Federation. “Due to the sensitivities concerning the game, both sides needed (time).”

The idea of an Iranian, American exhibition match as a political icebreaker was first proposed in May. Iran beat the U.S. 2-1 in the 1998 World Cup. Most recently, the two teams reached a 1-1 draw in a friendly played on U.S. soil.