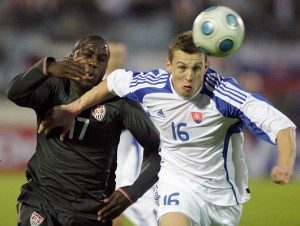 Although they controlled the ball well and looked to be the more dangerous team, the U.S. national team was unable to score in their first international exhibition after qualifying for the World Cup, losing 0-1 to Slovakia on Saturday. The mostly uneventful match was sealed in the 26th minute, when Marek Hamsik scored from the penalty spot, after U.S. defender Jonathan Bornstein tackled Vladimir Weiss from behind.

The U.S.came close to taking the lead early in the second minute of play, when midfielder Michael Bradley headed in from a corner by Robbie Rogers. The goal was disallowed, however, as Bradley was ruled offside. Outside of those two occurrences, neither team looked particularly strong on the attack.

Although the loss is disappointing for fans, the national team has a chance to finish the year with a win next Saturday, when they play at Denmark. Player appearances after the break.