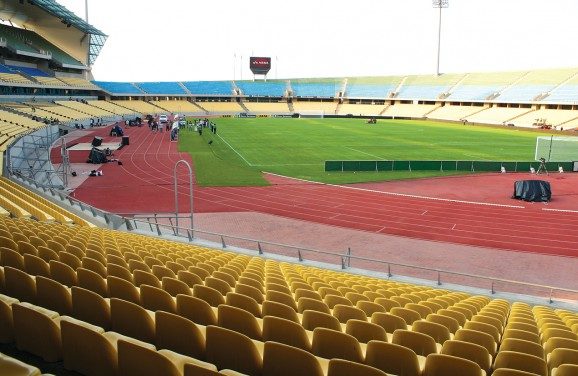 When the U.S. faces England on June 12, they will do so in the Royal Bafokeng Stadium, the smallest venue at the World Cup. ESPN columnist Grant Hall has a quibble with this.

“This stadium holds 42,000,” Hall notes. “Why would you put the game between arguably the richest two nations in the tournament (the fans will be most able to afford to attend, in other words), in the smallest stadium?”

It’s a fair criticism. But at least the stadium looks nice and cozy. “Track will be covered for the Cup,” he adds. Describing it as “very cosmetically appealing,” Hall gave the venue and overall grade of B-plus.

On June 18, the U.S. plays Slovenia at Ellis Park Stadium. In his review of all 10 stadiums, Hall gave it a C grade, calling it “a little rough around the edges.” That said, he also said the 62,000 capacity pitch has character, being the place where Invictus was filmed.

In its last group game on June 23, the U.S. will face Algeria at Loftus Versfeld Stadium (home of the Springboks). Hall gave this place a failing grade of D—the worst of the lot. “Yikes! The grass looked awful even though it was the end of the South African summer,” he says. The pitch will be reseeded before the start of the World Cup, but three rugby games will be played after reseeding, “and them boys ain’t exactly easy on the vegetation,” Hall says.