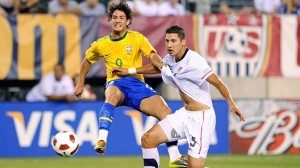 U.S. lost 2-0 tonight at home against Brazil. And similar to their failed World Cup campaign, it was all about porous defense (Hi, Bornstein), and poor coaching (i.e. talking Buddle out early, after not really playing him at the World Cup).

In fairness, Brazil was the much better team. I said “inexperienced” previously. What I should have said was young. And fast. And flashy. And great possession. Welcome back, Brazil.

As for U.S. player of the match, it was all Brad Guzan, who kept it from getting way out of hand. As for coach Bradley, it seems like this was his last game. Rumors are swirling that U.S. Soccer will name Jurgen Klinsmann as Bradley’s successor, the same Klinsmann that turned down the job four years ago.