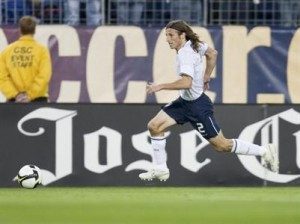 Despite political unease in Honduras, the U.S. men’s national team says they’ll remain focused for Saturday’s qualifier, where they can clinch their six consecutive World Cup appearance with a win.

“We understand the political aspect going on down there,” midfielder Stuart Holden said Tuesday after the team’s practice in Miami. “You can guarantee it’s going to be a hostile environment in that stadium.”

The United States (5-2-1) lead regional qualifying with 16 points, followed by Mexico with 15 points, and Honduras with 13 points. Only the top three North/Central America/Caribbean teams automatically advance to the World Cup.  The Americans have beaten Honduras twice this year; once in a June qualifier, and a second time at the Gold Cup in July.