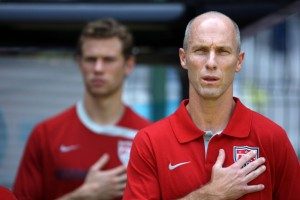 U.S. coach Bob Bradley named his 20-man roster today for next week’s exhibition match at The Netherlands. As expected, the team includes sixteen European-based players, three MLS ones, and one Mexico-based:

“This is a great opportunity for us to bring many of our European-based players together as we continue to finalize our plans for the World Cup roster,” Bradley said. “This is the final match before we bring the team together for the World Cup, so to have a match against one of the top teams in the world like the Netherlands is a big benefit and a good challenge for our group.”

In addition to determining which European-based Americans will make the World Cup roster, Wednesday’s game will debut the new away jerseys that the team will wear in South Africa.