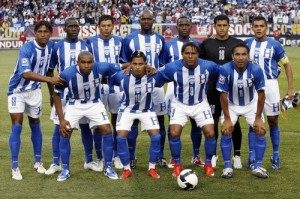 With only two qualifiers remaining, the US men’s national team can secure its sixth consecutive World Cup birth with a victory at Honduras tomorrow. ESPN’s Ives Galarcep says we can expect the following:

The U.S. men’s national team has played Honduras three times this year, but none of the previous meetings will be as tough for the Americans as the fourth meeting, this Saturday in San Pedro Sula. It won’t just be the toughest because it is in Honduras, but because Honduras will be featuring a strong side than any the Americans have faced this year.

Most sports writers seem to think the U.S. will lose. I on the other hand, think they’ll pull out a win. Only 24 hours to find out. Game starts at 10 pm Eastern, likely streaming live on justin.tv since the game is close circuit.