Will a German start at midfield for the U.S. this summer? — USA Soccer Stud 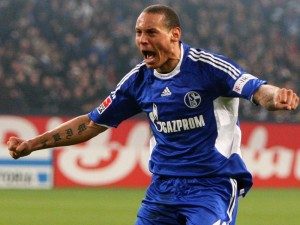 Since being approved by FIFA to play for the United States five months ago, German-born Jermaine Jones has yet to suit up for the team he hopes to represent at the World Cup this summer: his father’s native USA.

According to columnist Greg Seltzer, not only should Jones make the team, he should probably start at midfield, provided he can recover in time from a fractured shin. “American fans are not being wild by hanging hopes on the 28-year-old,” Seltzer writes. “Jones is quick, agile, tough and plays the two-way game needed to fit into coach Bradley’s system.

“From the last two seasons, he was ranked the eighth and fourth best midfielder in the Bundesliga by noted German magazine Kicker… Even if it remains hard to envision Jones patrolling the middle for the U.S. in South Africa this summer, he was able to begin blending in with the team during a visit for their March 3rd friendly in the Netherlands.”