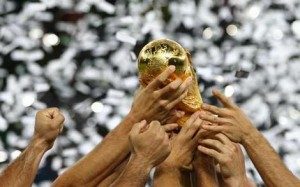 What’s world domination without the spoils? According to the Associated Press, the winning team of next year’s World Cup will get $31 million in prize money. The first loser, aka the runner-up, will get $25 million, with payments gradually shrinking to $9 million for teams who are eliminated in the group stage.

The total prize pool to be divided between the 32 participating nations amounts to $420 million, says FIFA, which is a 60 percent increase from the $261 million paid out at the 2006 World Cup in Germany. Whatever the winnings, I think it’s safe to say this is one sporting event that’s not entirely played for money. It’s for universal athletic bragging rights.