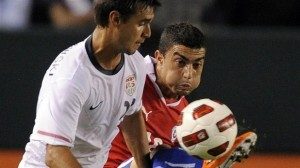 CARSON, Calif. — Teal Bunbury converted a penalty kick in the 75th minute for his first international goal, giving a young United States team a 1-1 exhibition tie against Chile on Saturday night in the Americans’ first game of the year.

Estaban Paredes, the only player on either roster to play at last year’s World Cup, put La Roja ahead in the 53rd minute with a 7-yard volley inside a post, off a cross from Felipe Seymour after defender Marvell Wynne overcommitted.

Juan Agudelo, an 18-year-old forward who like Bunbury made his debut in November’s win at South Africa, was tripped one stride into the penalty area by Sebastian Toro. Bunbury, whose father Alex scored 16 goals for Canada from 1986-87, slotted the penalty kick in as goalkeeper Paulo Garces dived the wrong way, to his right.